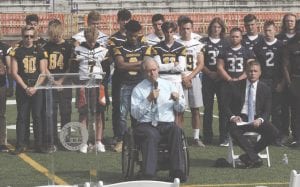 Judge Duncan Beagle speaks on the history of Atwood Stadium during Tuesday morning’s press conference, flanked by area high school teams that will play in the Classic this season. Photo by Brandon Pope

FLINT – Since Kettering University’s revitalization of Atwood Stadium, many events have taken place on the newly installed field turf. One of the more anticipated events is the annual Vehicle City Gridiron Classic, which kicks off the high school football season in the Flint area. Several of the participating players and coaches were on hand for Tuesday’s press conference at Atwood.

In its first two years, the Gridiron Classic has brought in a variety of schools and drawn in thousands of fans, some of whom had never been to Atwood.

“Atwood has always had a special place in my heart,” said Tony Vance, vice president of the Vehicle City Sports Committee. “The first time I played down here I was probably eight years old playing 10-and-under soccer. Then I went on to play high school football at Flint Central. I can remember running out of the locker room as a defensive back for the Flint Central Indians as the band is playing and the lights are on.

“Hopefully, these gentlemen can create some of those same high-school memories in the Gridiron Classic.”

This year, however, there has been a shakeup in the format. In the previous two years, the Gridiron Classic was three games in one day. The 2019 version will consist of four games over a two-day span, allowing for more teams to relish in the experience.

“If you’re a major league baseball player, once in your life you want to make sure you go to two stadiums. You want to go to Fenway Park and you want to play at Wrigley Field,” said Judge Duncan Beagle. “When you look at this stadium, I want these young people to know what a real treat it’s going to be for you to play at this facility.”

The festivities kickoff on Thursday, Aug. 29 with a 4 p.m. Saginaw Valley League crossover match-up between Grand Blanc and Midland Dow. That will be followed by a 7 p.m. battle between Goodrich and Flint Powers Catholic.

The action resumes on Friday with a 4 p.m. game between North Branch and Otisville LakeVille, which leads up to the 7 p.m. finale of Flint Carman-Ainsworth and Port Huron.

“This particular facility is celebrating it’s 90th birthday which is just amazing,” added Beagle. “Over the years, we’ve had two presidents that have visited here, we’ve had rock concerts – The Who, famous rock group came here in ’67. We’ve had championship boxing matches, we’ve had minor league baseball. But when you really think about Atwood Stadium, you think high school football.”