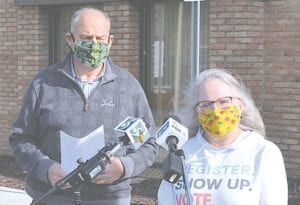 During the briefing, Gleason applauded area clerks and election workers for spending long hours tallying a record turnout of absentee and in-person ballots that were cast in the Nov. 3 presidential election. He also said that election results in Genesee County were accurate and untainted by claims of “skullduggery” or fraud.

For the past several weeks, President Donald Trump’s campaign has alleged that illegal votes and fraudulent mail-in ballots were cast across the state during the Nov. 3 election. The Trump campaign has also filed federal lawsuits to stop Michigan’s certification of votes and called for a statewide election audit to be conducted. Thus far, those lawsuits have been unsuccessful.

Gleason said that claims of election fraud are hurting the democratic process and damaging the reputations of clerks and election workers across the state.

“There’s been a great deal of duress put on our staff and people that do our type of work across the state of Michigan about fraudulent activity,” he said. “That’s a hoax. That’s a witch hunt on well-meaning and very honest individuals. There’s no way in the world Kathy Funk or the other clerks would ever understand the results ahead of time to manipulate the outcome to favor one candidate over another.”

Altogether, Flint Township received 10,420 absentee ballots in the Nov. 3 election. Funk said that the township’s absentee ballot count was only off by two ballots because two envelopes did not contain ballots.

“My staff worked extremely hard on the election and balanced the number of ballots every day,” she said. “At the end, our counting board rechecked the numbers and counted each precinct. I’m confident in the integrity of our election and elections across the county.”

Gleason said that Biden’s margin of victory in Genesee County reflected an historic turnout for absentee ballots, rather than fraudulent returns.

“Democrats overwhelmingly chose to vote absentee and Republicans voted by walk-in,” he said. “About 20,000 (votes) was the difference between AV votes and the same-day voting. That determined the outcome itself.”

The state’s bi-partisan Board of Canvassers was scheduled to meet on Monday to certify Michigan’s election results.